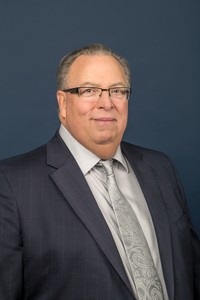 Larry grew up in Chicago, graduating from Mendel Catholic High School, then receiving a Bachelor of Arts from Lewis University and Master of Science from DePaul University. He served 24 years with the Matteson Police Department, the last ten years as Chief of Police. He joined the Homewood Police Department as Chief in 2000 and served as Chief until his retirement in 2016. He was appointed to serve as a Trustee on the Homewood Village Board when a vacancy occurred in August 2016. He is currently the Board Representative to our Veterans Committee.

When his (now adult) boys were younger, Larry served as a Cub Scout Leader and President of the Homewood Swim Club. Larry and his wife, Nancy, attend St. Joseph church in Homewood.